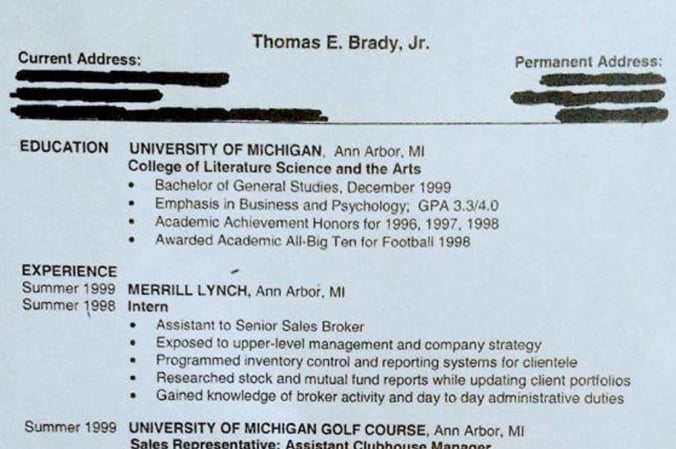 Tom Brady, New England Patriots quarterback and 5 time Super Bowl winner, had put together a resume just in case he wouldn’t make it to the NFL.

After graduating from the University of Michigan in 2000, Brady wasn’t sure that he would make in the NFL, so he made sure to polish up his resume. After the 5th round in the draft he thought he’d need to use it for sure, but was picked up in the 6th round.

The resume lists his internship at Merrill Lynch and his job at the University of Michigan Golf Course.

Brady isn’t going to need this document, but he did a pretty good job of laying it out. While there are some typos and grammatical errors, and some wasted space, overall it’s pretty good. He lists his experience in reverse chronological order and has a few short bullet points explaining his responsibilities. He also showcases his accomplishments at the bottom.

If we were to give Brady a few more tips to make his resume stand out, we would tell him to make the job title stand out more than the company name and to get rid of the cluttered header. You don’t need to list two address. All you really need is your name, contact information, and maybe a city and state or “open to relocate” at the top. Brady should have also made his name standout more, so employers know who’s resume they are reviewing.

While it may not pass the 8 Second Resume Test, it might get a second look.

Everyone has to start somewhere, even Tom Brady!

Cows Spend an Average of 6 Hours a Day Eating
Dairy: Milk From the Cow to the Shelf