Figs are Pollinated by Wasps 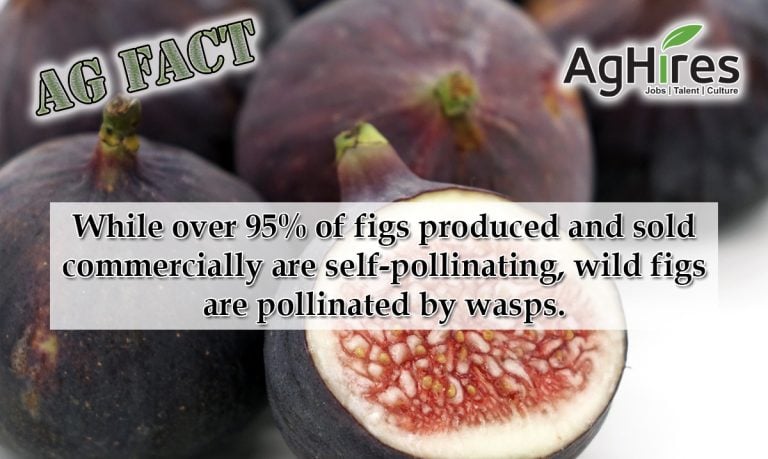 Did you know that figs are inverted flowers? The flower blooms on the inside of the pear-shaped pod and turns into fruit. Each flower produces one-seeded, hard-shelled fruit called an achene. Each fig is made of multiple achene. Areas with full sunlight, warm temperatures, and well-draining soils are ideal for this fruit. In these conditions, figs can produce fruit in late summer and early fall.

Figs trees have been cultivated for around 11,000 years in western Asia. In the 1790s, Spanish and Portuguese missionaries introduced the fruit to western North America. Today, California produces 98% of fresh figs and 100% of the nation’s dried figs. Over 95% of the figs produced and sold commercially in California are self-pollinating, while wild figs are pollinated by wasps.

A fig wasp is a specific type of wasp that helps pollinate the inverted flowers. The wasp spreads the pollen by laying its larvae in the fig. But don’t worry, we don’t eat these figs. The female wasp uses the male fig to lay her eggs. When a female wasp enters the fig, her wings and antenna break off and she is trapped. The baby wasps will continue the life cycle. Female wasps are the only babies born with wings, so they spread the pollen. The purpose of the male wasps is to mate with the females.

Sometimes a female wasp will enter a female fig by accident, but this is necessary for pollination. The wasp is trapped and has no room to lay larvae. The wasp will die, and the fig will produce an enzyme known as ficin to break down the wasp into protein.

However, there are times where the exoskeleton doesn’t entirely break down. But there is good news! These wasps are very small, so you most likely won’t know if you ate one.

Want the buzz on figs? Read on to learn how wasps affect figs.