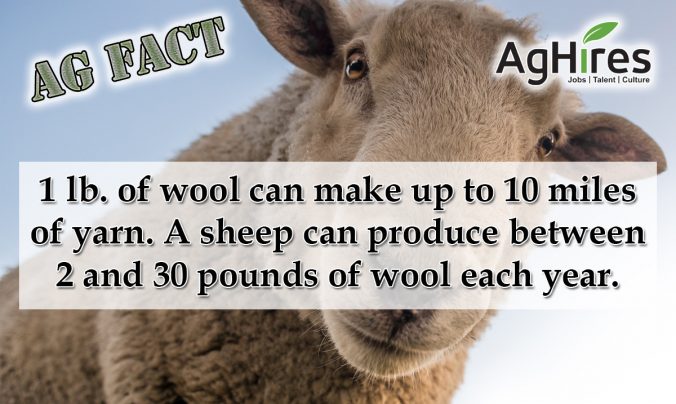 Raising sheep is one of the oldest organized industries, beginning during biblical times. Domestication began 10,000 years ago in Central Asia and people started spinning wool around 3,500 B.C. They were brought to North America with Christopher Columbus, but during the 16th and 17th centuries they were smuggled into the United States to develop the wool industry.

SHEEP IN THE STATES

In 2012, there were over 88,000 sheep farms and ranches in the U.S. and as of January 2018 there were over 5 million head of sheep. Texas, California, Colorado, Wyoming and Utah have the most sheep and lambs. However, the states with the most operations include Texas, Arizona, California, Pennsylvania, and Ohio. While, these animals are raised in all 50 states, the highest producing states are on the west side of the Mississippi River.

A single animal consumes about 2 to 4.5 pounds of food each day. They do not have teeth in their upper front jaw, but have a split in their upper lip that allows them to select ideal leaves off a plant. Depending on the breed, ewes, an adult female, can be between 90 and 300 pounds. The field of vision on sheep is between 270 and 320 degrees, much greater than humans, which is about 155 degrees. This allows them to see behind them without turning.

Unlike wild sheep, who naturally shed, the domestic animals must have their hair trimmed because it won’t stop growing. In 2004, a Merino sheep known as Shrek hid in a cave in New Zealand for six years to avoid being sheared. By the time he was found and sheared, he had enough wool to make 20 men’s suits.

Most wool is shorn once a year depending on the breed. A sheep can produce between 2 and 30 pounds of wool each year. To put that into perspective, one pound of wool can make up to 10 miles of yarn. In the United States, the average weight of a fleece taken off a sheep is over 7 pounds, but it varies from state to state. An average fleece in North Carolina, for example, weighs 5 pounds, while in Nevada an average fleece weighs 9.8 pounds. The top wool producing states include California, Utah, Wyoming, Colorado, and South Dakota.

U.S. wool is usually harvested in the spring. More than half of the wool produced in the States is usually sold during April, May and June. Over 24 million pounds of greasy wool, which is unprocessed wool, was produced in 2017 in the U.S. The raw wool may go through 70 processing steps to make it the highest quality.

The most widely known reason farmers raise sheep is for their wool, however, they give us many products. Meat is the other major product they provide. Lamb and mutton are great sources of important vitamins and proteins. In 2010, about 163 million pounds of lamb and mutton were produced in the United States.

Sheep milk is used to make gourmet cheeses, yogurt, butter, and ice cream. The United States is one of the largest importers of sheep milk cheeses. The fat from these animals can be used to make candles and soap. Lanolin, which is wax secreted by the sheep and taken out of the wool during processing, is used to treat and prevent dry skin, itching, and other skin irritations.

Other than the products they provide, sheep have been useful in creating healthier landscapes. President Woodrow Wilson kept the Whitehouse lawn trimmed by having several sheep on the property. By grazing on vegetation, they can promote healthy forests and fight weed and insect pests in crops. They can control weeds that are harmful to other animals. For example, in Montana sheep are managing thousands of acres of leafy spurge. In California sheep, as well as goats and cattle, are spread throughout parks to help prevent the spreading of wildfires by grazing on grass and brush that could be fuel to the fire. Even ski resorts have found value in their grazing, by allowing them to munch on invading brush and weeds.

Did you know that there are over 1 billion sheep in the world? Click here for more fun sheep facts!