Americans Eat About 13 Billion Quarts of Popcorn a Year 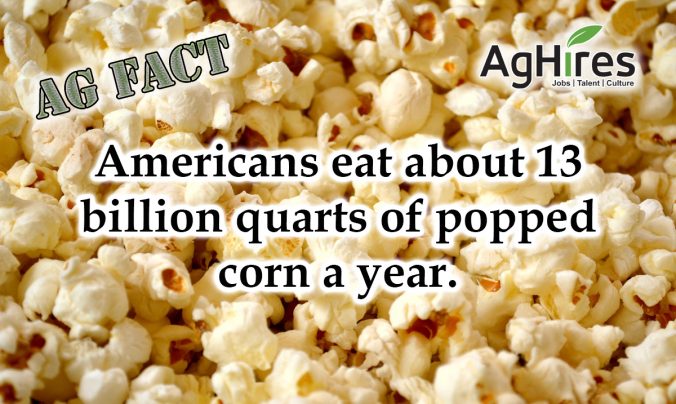 With majority of the world’s popcorn production in the U.S., it makes sense that Americans eat about 13 billion quarts of popped corn a year. That averages out to about 42 quarts a person. Popcorn is even the official snack of Illinois. Surprisingly, approximately 70% of the snack is eaten at home, with the remaining 30% eaten at theaters, stadiums, etc.

Majority of the crop is grown in Nebraksa, with Illinois, Indiana, Kansas, Michigan, Missouri, Nebraska, and Ohio rounding out the top producing states. About 90% of the sales of unpopped popcorn is sold to consumers for at home consumption.

From The Seed To The Bowl

While popcorn looks like a delicious corn on the cob, only a popcorn cob has the ability to pop. Growers select the seeds for their traits, such as successful popping. Crops are planted in the spring using a corn planter, which plants about 28,000 seed per acre. It takes about 7 days for the seed to germinate and 10 days for it to emerge above the soil. Stalks can reach approximately 8 feet high. The crop requires 18-24 inches of water during their growing season.

When the leaves are brown and dry, the kernel is hard, and a black layer has formed, then it is time to harvest. The combine will strip the ears from the stalk and then feed the ears into the machine to remove the kernels. The kernels are loaded onto a truck to be transported to a storage bin until they reach a 14% moisture level. The kernels are then cleaned and sorted to remove any of the cob and small kernels. Once they are polished they are ready for distribution.

In order for the corn kernel to have perfect popability, several things have to happen. The moisture content of kernel needs to be between 13% and 14.5%. The expansion ratio should be 35 to 38 to one. Also, a good batch should have at least 98% of the kernels popped. Everything from processing procedures to home storage and handling effect the quality of the popcorn, so be sure to store your popcorn properly to enjoy the perfect pop.

The oldest ears of popcorn were found in a cave in Central New Mexico and are believed to be about 4,000 years old. Early forms of the snack food can be traced back the Native American as well. While it has been around for thousands of years, the snack didn’t become commercially popular until more recently.

In the mid-1800’s the snack corn started to grow in popularity due to the invention of the moldboard plow. This allows farmers to plant more maize easily. Today most people think of popcorn as a movie theater snack, but at one time it was a common breakfast food, eaten just like the today’s cold cereal.

Even though it was already a popular snack, the Great Depression fuel popcorn to become more commercialized since it was cheap. Also, during World War II most of the sugar supply was redirected for the war effort, causing popcorn to be used as a substitute for candy.

With the invention of the television in the 1950’s, sales plumped since consumers stopped attending movie theaters. But a short 30 years later, microwaved popcorn was invented, and consumption skyrocketed again. By 1995, 65% of all sales were of the microwave variety.

Grab a bucket of popcorn while you learn some facts!