85% of Rice Consumed in the U.S. is grown within the country 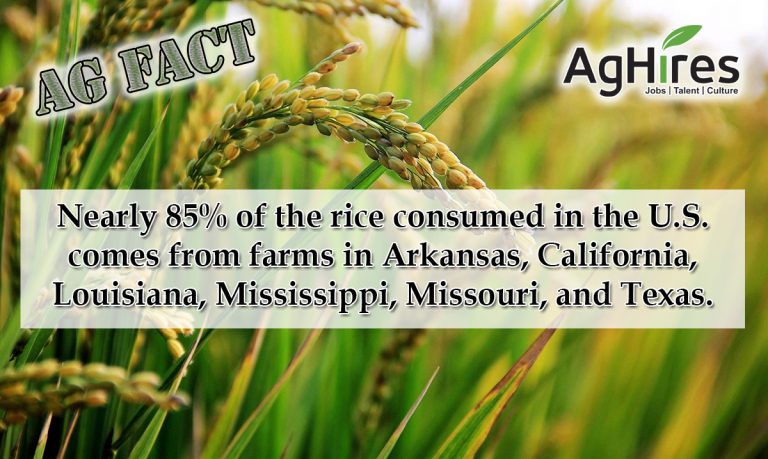 Rice, a cereal grain, is the mostly commonly consumed food around the world, especially in Asia where cultivation of the grain originated more than 5,000 years ago. It is grown on every continent, except Antarctica, and is the 3rd highest produced food worldwide, behind sugarcane and corn.

There are two types of plants, Oryza sativa plant (Asia varieties) and Oryza glaberrima (African varieties). Both are harvested from long, grass-like stalks. It is believed over 40,000 varieties exist today. Brown rice is a whole grain with the inedible hull removed, while white rice is the same grain with the hull, bran layer, and cereal germ removed. Other types include, red, gold, black, and purple rice, which are all whole grains with different pigmented outer layers.

This grain is a labor-intensive crop that requires lots of water, so growing the grain is suited best for countries and regions with low labor costs and high rainfall. However, it can be grown almost anywhere. In the United States, 18 billion pounds of rice is grown each year in Arkansas, California, Louisiana, Mississippi, Missouri, and Texas. Thanks to industrial efficiencies, the U.S. has a high quality of rice and become one of the largest exporters of the grain in the world. Nearly 85% of the grain consumed in the U.S. come from these local farms.

How Rice is Grown in the U.S.

Because of the technology available in the United States, the lack of heavy rainfall does not determine a low yield. Machinery can create the ideal field to grow a successful crop and unique planting and harvest equipment have reduced the time spent in the field.

It takes about 120 days for the seed to mature. Once the plant is ready to be harvested, advanced combines cut the plants and separate the grain from the stalks. The crop is then taken to drying facilities to gradually reduce the moisture content for a better-suited level for storage.

After the moisture has been reduced, the grain will make its way to the mill. The rough rice passes through a sheller machine to remove the hull. Two things can happen after the hull is removed: either it will be used as is for brown rice or it will be processed further to become white.

To produce white rice, machines rub the grains together under pressure to remove the bran layer. The polished grain is then enriched with a thin coat of vitamins to replace some of the nutrients that were lost during the milling process.

Search for jobs in grain here.

This crop is surprisingly grown in the USA. Check out this little known fact about rice!