Arkansas produces 49% of the rice supply in the U.S. 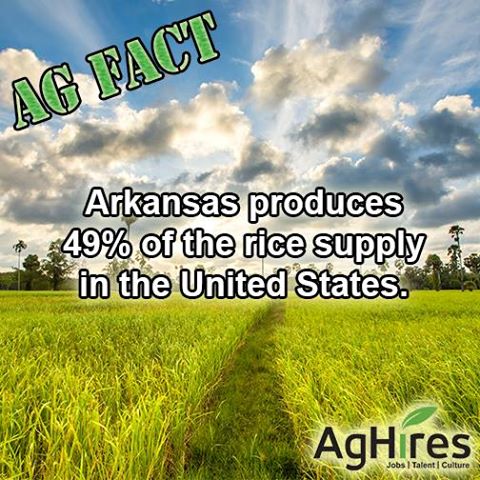 Rice is a staple for nearly two-thirds of the world, with near 90% grown in Asia, but in the United States Arkansas is the leader in the crop. While the grain has been grown in U.S. since the 1700’s, it wasn’t until the twentieth century that the industry hit Arkansas.

History of Rice in Arkansas

Rice production made its way to Arkansas in 1903. William Fuller is known from bringing the crop to Arkansas. While in Louisiana in 1896, Fuller saw rice being cultivated and after noting the similarities in the soil conditions, he decided to being experimenting with crop on his own land in the Grand Prairie. After his first 3 acres failed, he decided to work on rice farms in Louisiana, and for several years he learned the techniques of cultivating the grain.

Fuller returned to Arkansas in 1903 to bring his new knowledge to Arkansas. After finding some investors, he began planting 70 acres of rice in 1904. That year he produced 5,225 bushels. By 1910 rice production was established.

The heavy clay soils of the Arkansas are ideal for holding water, which make it great for the water-intensive crop. With the irrigation systems today, farmers are able to ensure their rice fields have plenty of water to achieve high yields. It is also ideal to have a smooth surface to have consistent flooding and drainage.

In Arkansas, rice crops typically are planted in late March/early April, which harvest usually beginning in August. Once harvest is completed, farmers will flood their fields to prevent erosion and to protect soil nutrients.

Each year Arkansas farmers plant 1.3 million acres and harvest over 200 million bushels between 2,752 farms, which equals to more than 9 billion pounds a year.