Most Pistachios Produced in the U.S. Come from California 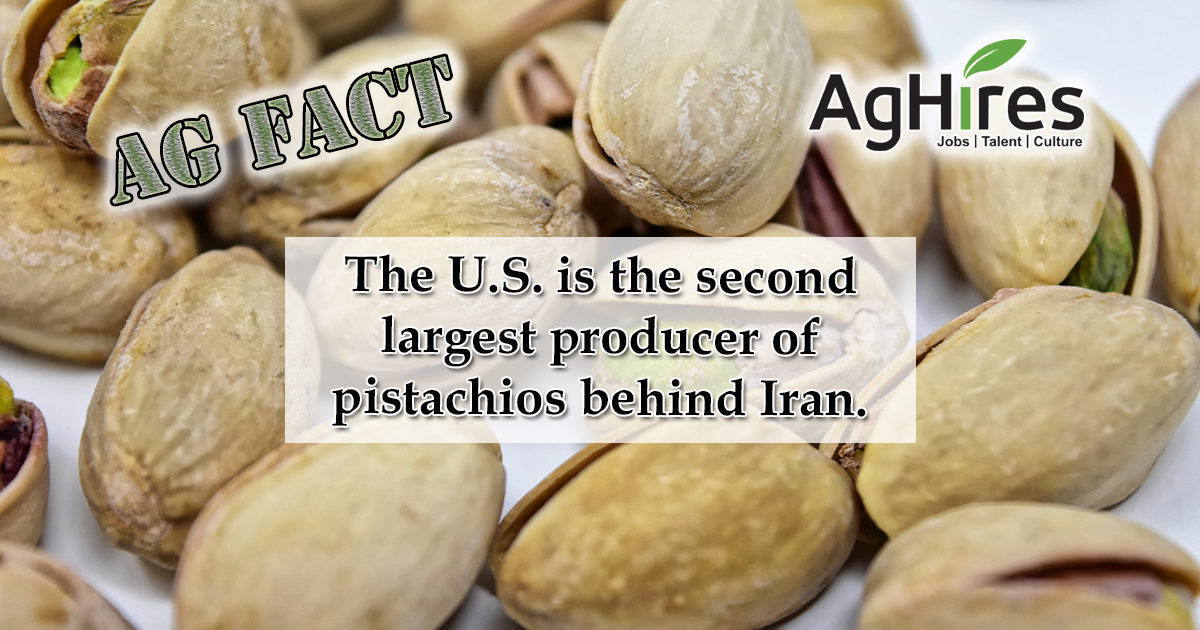 Did you know your favorite nut isn’t actually a nut? Pistachios are a seed from a red or yellow plum-like fruit. However, since they look like nuts, most people call them nuts.

The United States provides about 24% of the world’s pistachios, making the country the second largest producer and exporter behind Iran. About 99% of the pistachios produced in the States come from California. Over 312,000 acres of trees are planted across the state in 22 of 58 of counties in the state. Arizona and New Mexico produce the remaining 1% of the nuts.

It takes five to seven years for a newly planted tree to produce a crop, but it takes 15 to 20 years for them to reach their full capability. Pistachios are pollinated by the wind, instead of by bees. Only one male tree is needed to pollinate 30 female trees.

In the U.S., the trees are harvested between late August and early October. They’re ready to be harvested when the shell is split. The trees are then mechanically shaken. The pistachios are caught on a tarp and taken to a processing facility to be hulled and dried. The nuts need to be processed within 12 to 24 hours after harvest, so they must be close to the facilities. There are only about 13 farms that can process them on site.

A fully mature tree can produce up to 50 pounds of dry, hulled pistachios.

Pistachio trees have been around for thousands of years. They are native to the Middle East. The nuts were even mentioned in the Old Testament. They were so popular that ownership of pistachio groves meant high status and riches in Persia (modern day Iran). Eventually, they spread to the Mediterranean.

The imported nuts were very popular in the United Stated in the 1880s. However, it wasn’t until 1929 did their journey begin to be grown on U.S. soil. American botanist William E. Whitehouse traveled to Persia in 1929 to collect pistachios and brought home about 20 pounds of different nuts he gathered during his year abroad. Within a year of returning home, Whitehouse had planted his first test plots; however, it would be close to a decade before he would know what he collected. Only one of the many nuts he collected would be useful. He named it Kerman, after the famous carpet making city near Rafsanjan, Iran where he found the nut.

Whitehouse experimented for many years. It wasn’t until the 1960s when the American pistachio industry began taking off in California. Later, Arizona and New Mexico began growing the nut. The industry has grown greatly in the since it began. The first commercial crop in 1976 produced about 1.5 million pounds of pistachios. In 2016, over 900 million pounds were produced, making it a record year.

Pistachios grow in sunny California. Learn all about this fun crop.