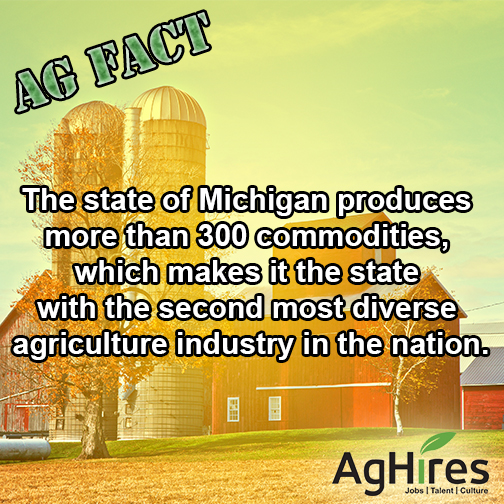 The state of Michigan produces more than 300 commodities, which makes it the state with the second most diverse agriculture industry in the nation, just behind California. Michigan ranks number one nationally in the production of blueberries, tart cherries, and squash – just to name a few.

Michigan’s commodity mix is made up of about 60% crop and 40% livestock. Some major commodity sectors are milk, soybeans, cattle, hogs, and poultry. Each year, Michigan exports about one-third of its agricultural commodities, which generates nearly $3.2 billion. Canada is Michigan’s number one export market, where nearly 60% of their agricultural exports go. Other countries that are eager for Michigan-grown products are Mexico, Japan, China, and South Korea.

There are approximately 2,000 licensed food processors in the state of Michigan, which employs more than 130,000 residents. The agriculture industry as a whole employs 923,000 Michigan residents, which is about 22% of the workforce. In 2014, there were 51,600 farms throughout the state and 95% of them were single-family operated or family partnerships. The average size of a farm was 193 acres.

Furthermore, Michigan ranks third in the nation for the number of farmers markets. It also has 119 wineries and 200 micro-breweries.

To read some more facts about the Michigan agriculture, click here.