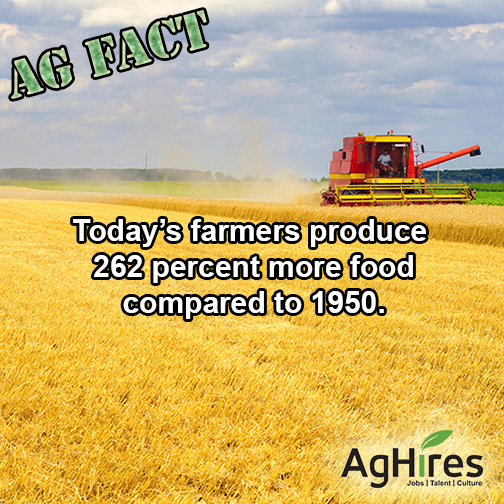 American agriculture farmers are producing more with less. Farm and ranch productivity has heavily increased since 1950, but the use of resources has strongly declined.

Today’s farmers produce 262 percent more food compared to 1950. Total crop yield in the United States has increased more than 360 percent since 1950. While this has increased, the use of resources, such as seeds, labor, feed, fertilizer, land, and water, has declined.

Since 1982, U.S. land being used for crops has declined by 70 million acres. Dairy cow milk production has become more efficient. The amount of feed a cow needs to consume to produce 100 pounds of milk has decreased by more than 40 percent in the last 30 years. Methods for reducing erosion (soil loss) and using less energy has grown from 17 percent of acreage in 1982 to 63 percent currently.

As the demand for agriculture continues to grow, the industry continues to develop new, more efficient ways to provide.

Learn how American farms have evolved high-efficiency methods since 1950