4,400 Cranberries Can Make a Gallon of Juice 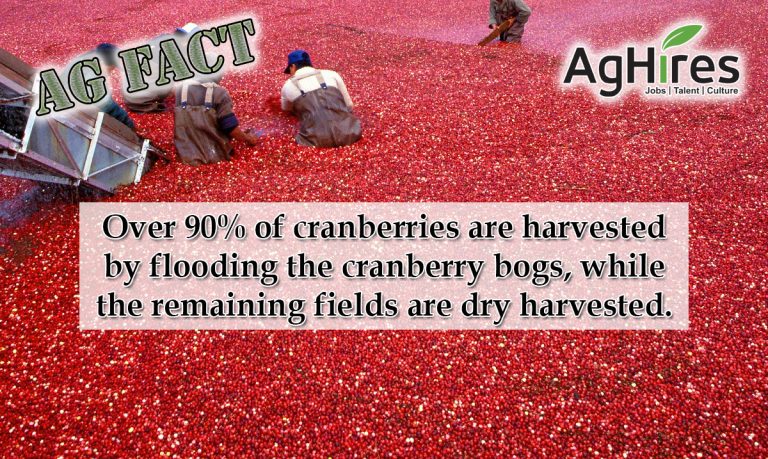 Cranberries, native to the American wetlands, are very unique. They require a special combination of factors that the wetlands provide, which include acid peat soil and adequate fresh water. The top producing states of the fruit include New Jersey, Massachusetts, Oregon, Washington, and Wisconsin. Canadian provinces of British Columbia and Quebec are also top producing areas. Other production areas include Delaware, Michigan, Maine, New York, Rhode Island, provinces of New Brunswick, Nova Scotia, and Ontario.

The fruit grows on low-laying vines in beds, known as bogs, layered with sand, peat, gravel and clay. Bogs were originally created by glacial deposits left more than 10,000 years ago. Receding glaciers created cavities which created kettle ponds that filled with sand, clay and debris to create the perfect environment for cranberries to grow.

While the Wampanoag People enjoyed eating wild cranberries for over 12,000 years, cultivation of the berries in the United States began in 1816 after Revolutionary War veteran, Captain Henry Hall of Dennis, Massachusetts, noticed wild cranberries grew better when sand blew over them. Hall started to transplant cranberry vines to spread sand on them, and his technique was quickly replicated by others, thus starting the industry of cranberry growers. By 1885, about 3,755 acres of cranberry bogs took over Massachusetts and by 1990 acreage tripled. Today farmers harvest about 40,000 acres of cranberries each year.

To protect the vines and buds from injury during the winter, cranberry bogs are flooded from late December through mid-March. When warmer weather returns, the winter flood is removed, and the vines slowly come out of dormancy. Sometimes bogs are flooded again in the spring to manage insects, weeds, and disease. Bees are essential to pollinate the flowers, so growers usually have one to two beehives per acre of bog when flowers bloom.

Harvest takes place from mid-September through early November. Cranberries can be harvested one of two ways, dry harvesting or wet harvesting.

Dry harvesting uses walk-behind machines to comb berries off vines into bags. The bags are then removed from the bog by helicopter or bog vehicles. To dry harvest the fruit, they must be completely dry. Even heavy dew or damp conditions can delay harvest. These cranberries are most likely used for fresh market.

Since the fruit floats, wet harvesting includes flooding the bogs to help remove them from the vine. Water reels stir up the water and help to dislodge the fruit from the vine, which float to the surface. Wooden or plastic booms are used to collect the cranberries, which are lifted out by conveyor or pumped into trucks. Over 90% of the berries are wet harvested. These berries are used for juices, sauces, sweetened dried cranberries, and more.

Learn all about refreshing cranberries.

Blueberries are Second Most Popular Berry in the U.S.
25 Strawberry Fun Facts