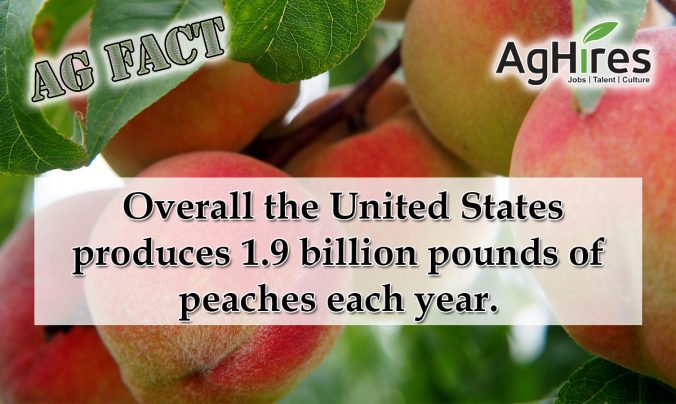 In 1982 President Ronald Regan declared August as National Peach Month, so we’re celebrating this month with fun facts about peaches. Not only is the entire month dedicated to peaches, but August 22nd is Eat a Peach Day and August 24th is National Peach Pie Day. So, whether you enjoy the fresh fruit or baking them into a dessert, this month is for you.

Peaches originated in China and were enjoyed by emperors. Recent data shows that domesticated peaches occurred as early as 6000 BC in Zhejiang Province of China. The fruit spread to Persia and where it was named the Persian Apple since many people believe the fruit originated there. Peaches spread to Europe thanks to Alexander the Great and by the 16th century Spanish explorers introduced the fruit to the Americas.

It wasn’t until the 17th century when the first tree was planted in Georgia. The peach industry didn’t start until after the Civil War when Georgia growers developed new superior varieties, which promoted the state the nickname “The Peach State.” The United States commercial peach industry accelerated quickly by the 1900s.

Most peach trees live about 15 years, but it takes two year for the tree to bear fruit. Even in the third year the tree isn’t as fruitful. By year 4 the tree is in it’s prime. When peaches become a creamy yellow color, they are picked by hand from the trees. Peaches don’t mature all at one time, so it is usually necessary to harvest a tree two, three, or even four times.

Once harvested, the fruit is immediately rinsed with cold water to stop the ripening process to ensure the fruit is not overripe when purchased by the consumer. They are then cleaned, while brushes remove the fuzz, and sent to be sorted. Finally, they are packed and shipped to stores or processing facilities, all within days of being harvested.

These facts are just peachy!