Over 450 Semi-Truck Loads Of Onions Are Consumed A Day 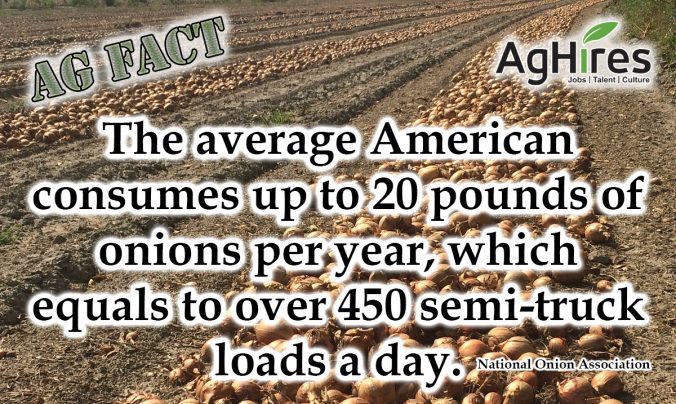 The average American consumes up to 20 pounds of onions per year, which equals to over 450 semi-truck loads a day. Nearly 20% of the vegetable are fresh or processed for retail or foodservice. Worldwide, about 105 billion pounds are consumed each year, which is over 13lbs. per person.

While it has been difficult to narrow down exactly where onions orientated, researchers believe they have been cultivated for at least 5,000 years. More than likely the vegetable was one of the first cultivated crops since they were easy to grow, could be grown in a variety of conditions, were less perishable than other foods, and were easy to transport. They prevented thirst and could be preserved for later when food maybe limited.

From the Egyptians, who worshiped the vegetable, to the Israelites in the Bible, onions were documented early on. The Romans ate them regularly, and by the Middle Ages, the main vegetables in European cuisine were onions, beans, and cabbage. The first Pilgrims carried the vegetables with them across the ocean, but found wild strains growing in their new land.

Today onions are grown in 20 states, with California, Idaho-Eastern Oregon, and Washington being the top producing areas. Approximately 125,000 acres of onions are planted each year, which produces about 6.75 billion pounds. Worldwide, about 8 million pounds of seeds produce approximately 9.2 million acres yearly. About 14 million fifty-pound bags are exported from the U.S. each year, with about 20 million fifty-pound bags being imported annually. China, India, United States of America, Turkey, and Pakistan are the leading countries in onion production.

Let's peel back the layers on onion facts!

Over 2,500 Varieties of Apples are Grown in the U.S.
14 Ohio Agriculture Facts