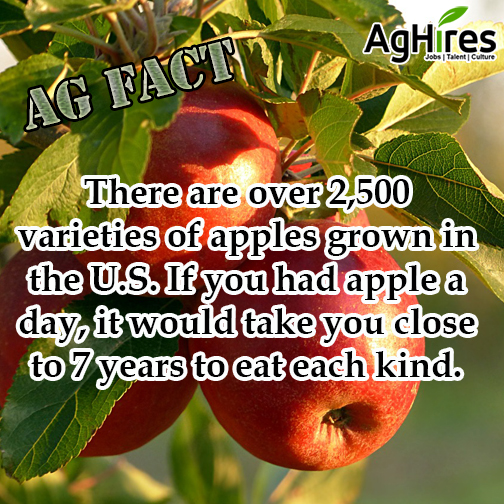 While commercially the fruit is grown in 36 states, apples are actually grown in all 50 states. The top producing states include Washington, New York, Michigan, Pennsylvania, California and Virginia. The apple blossom is actually the state flower of Michigan. The average orchard in the U.S. is about 50 aces. The average tree can fill 20 boxes that weigh 42 pounds each, and with about 300 trees per acre, that’s a lot of apples.

Apples come in all the shades of reds, yellows and greens, as well as a wide range of sizes. The top 10 varieties produced in the United States are Red Delicious, Gala, Granny Smith, Fuji, Golden Delicious, Honeycrisp, McIntosh, Rome, Cripps Pink, and Empire. The crabapple is the only variety that is native to North America. The Lady apple is one of the oldest varieties still around today.

Americans consume an average of 115 pounds of the fruit, either fresh or processed, per year. In 2015 the average American consumed about 1.6 gallons of apple juice, over 10 pounds of fresh apples, and over 3 pounds of canned, dried or frozen apples. About 67% of the fruit grown in the U.S. is for fresh consumption, while 33% is used for apple products, such as juices, applesauce, and slices.

Munch on these fun apple facts!