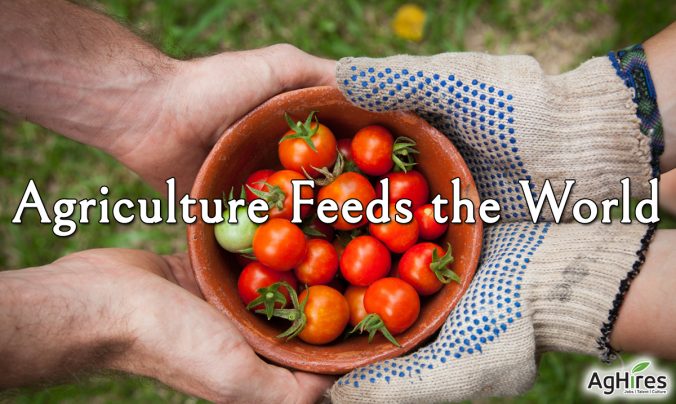 With over 7 billion people in the world eating food, agriculture works hard to feed the world. To celebrate National Ag Week (March 18-24, 2018) and National Ag Day on March 20th, we found 30 ways Agriculture feeds the world.

1. 40% of today’s global population works in agriculture, making it the single largest employer in the world.
2. Approximately 56% of agricultural production worldwide comes from family farms.
3. About 97% of U.S. farms are operated by families, family partnerships, or family corporations.
4. Farming employs over 24 million American workers (17% of the total workforce).
5. In 2006, the average American farmer grew enough food for about 144 people. To compare, in 1940, the average farmer grew food for about 19 others.
6. Livestock farming employs 1.3 billion people.
7. About 34 million cows are slaughtered in the U.S. each year.
8. A steer yields about 450 lbs. of edible meat.
9. The average American consumes over 55 lbs. of beef a year.
10. There are over 800,000 ranchers and cattle producers in the U.S.
11. Pork accounts for over 42% of total meat consumed, making it the world’s most widely eaten meat.

12. The average dairy cow produces 7 gallons of milk a day, 2,100 pounds of milk a month, and 46,000 glasses of milk a year.
13. Each American consumes almost 25 gallons of milk a year.
14. The number one fruit crop in the world is bananas.
15. American eat 19 pounds of apples annually, compared to 46 pounds consumed annually by Europeans.
16. The average American eats 4 pounds of mushrooms per year. The Chinese eat about 22 lbs. a year.
17. The top 4 crops worldwide are wheat, rice, corn, and bananas.
18. Americans eat an average of 31 lbs. of tomatoes a year.
19. 1 in 3 acres of crops is planted for export.

AgHires supports and celebrates National Ag Day and the mission to raise awareness about the importance of agriculture in today’s society. To search through thousands of agriculture jobs, go to: https://aghires.com/

Did you know that 1 acre of potatoes can yield 52 thousand servings of french fries? Click here for more fun facts!