Mechanical Tomato Harvester was Developed in 1959 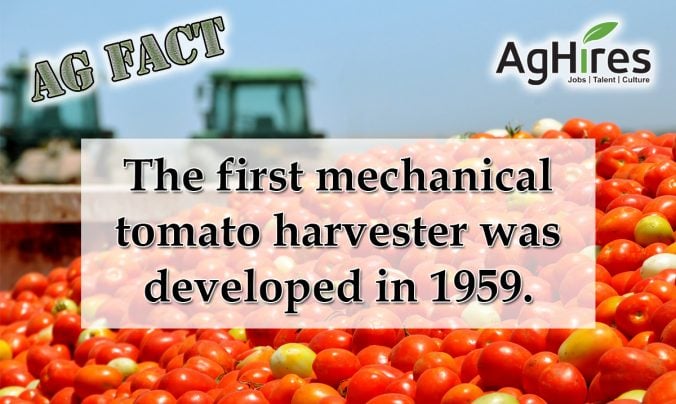 The process took time, and the two were doubted by many. Countless prototypes were developed that would breakdown in the field after hitting lumps of dirt and would cause tomatoes to split. And as with all revolutionary inventions, many people believed the machine would eliminate many jobs. However, concerns were not just with the machine, but also with the new, heartier tomato variety. This new variety became known as the “square tomato.” This name came from the blocky shape of the fruit to prevent it from rolling off the conveyor belts.

Before the harvester, tomatoes had to be picked by hand since tomatoes are more delicate. Most of the times laborers were brought in from Mexico to pick fresh tomatoes, through the Bracero program. However, in the early 1960’s the Bracero program was going to be discontinued and tomato growers were concerned about the drop of laborers. This is around the time Lorenzen and Hanna had a break through.

The team revolutionized the tomato industry almost overnight. Within 5 years of the successful tomato harvester nearly all growers in the industry were using mechanical harvesters, as well as growing the new hearty tomato variety. Processing facilities even reworked their systems to process the new fruit.

Today, nearly all tomatoes grown for processing to be used in sauces, juices, and more are harvested by Hanna and Lorenzen’s harvester. In 1972, the pair each received the John Scott Medal in honor of their development of the tomato harvester.