Cows Have Four Digestive Parts in One Stomach 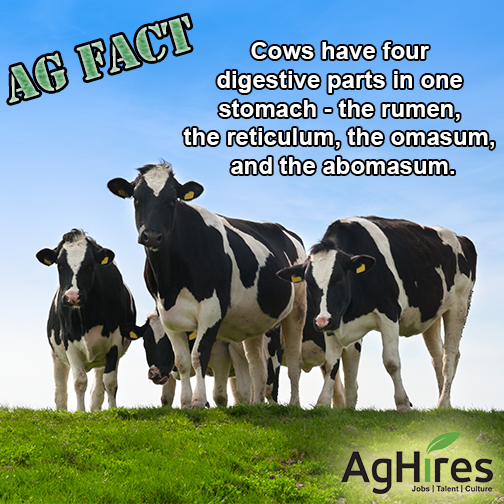 Contrary to popular belief, cows do not have four stomachs. Cows have four digestive compartments in one stomach – the rumen, reticulum, omasum, and abomasum.

The rumen holds up to 50 gallons of partially digested food. Good bacteria within the rumen helps digest food and provides protein. If a cow accidentally eats hardware, such as a piece of fencing scrap, it will get lodged in the reticulum and will not cause any further damage. The omasum works kind of like a filter, and the abomasum functions like the human stomach.

All 50 states in the United States have dairy farms. U.S. dairy farms produce about 21 billion gallons of milk each year. A cow produces an average of 6.3 gallons of milk daily. A cow has to give birth before she will be able to produce milk. The greatest amount of milk produced in one year by one cow was 59,298 lbs.

There are six breeds of dairy cows – Ayrshire, Brown Swiss, Holstein, Guernsey, Jersey, and Milking Shorthorn. Most dairy cows are milked two to three times per day. Through a combination of hay, grain, silage and proteins, and vitamins, a cow that is milking eats about 100 pounds of feed each day.

USDA statistics show that U.S. dairy farmers are producing almost three times the amount of milk with about half the number of cows compared to 1960. This reduces the total amount of feed, water, and space that is needed.

Cows Spend an Average of 6 Hours a Day Eating
9 Million Dairy Cows in the U.S., 94% are Holstein