Before WWII, most corn was harvested by hand. 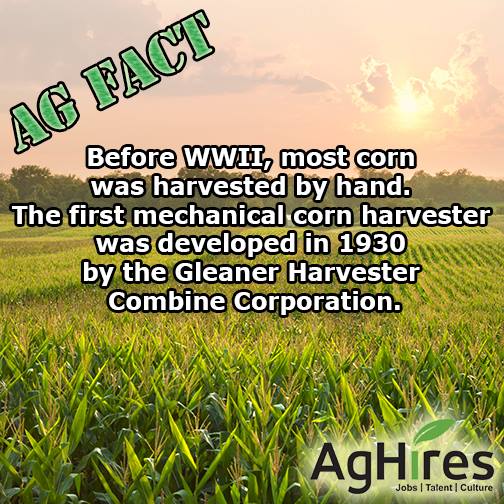 Before WWII, most corn was harvested by hand. The first mechanical corn harvester was developed in 1930 by the Gleaner Harvester Combine Corporation.

Before the Corn Harvester

Harvesting corn is a lot more difficult than crops such as wheat and small grains. Since the stalks are tough, they would tend to clog up machines, this was why most of the crop was picked by hand.  Also, it had to be dry to be stored, and since drying bins were not developed until the late 1930’s farmers waited until late in the year to harvest the crop when the it had dried out.

The corn was actually stored on the ear until just before being sold. Farmers was break the ear off of the stalk and remove the husk to store it.

The first harvester, marketed by Gleaner-Baldwin Harvester Company, could pick roughly 90% to 95% of the corn from the field. However, there were a few factors that came into play before the harvester became a largely used tool.  The Great Depression made it nearly impossible for farmers to come up with the money to purchase the $1,600 machine. And with World War II  looming, production was restricted.  It wasn’t until after the war did the machine start to become truly developed.

Another factor that came into play with the delay in developing the harvester was the way the crop  had to be stored. The harvester developed by Gleaner-Baldwin Harvester Company couldn’t harvest the plant that had too much moisture. Corn with high moisture was strong enough to survive the cutting of the machine, plus grain drying technology did not exists until after the war. Without this technology, the grain would rot in storage if it was over 14% moisture. By the time the war was over, grain bins had heating units that could dry the crop, giving farmers the opportunity to harvest the corn much earlier in the year. This drove manufactures to develop a better harvester.

Learn how moisture delayed corn harvests, until this invention changed all that!