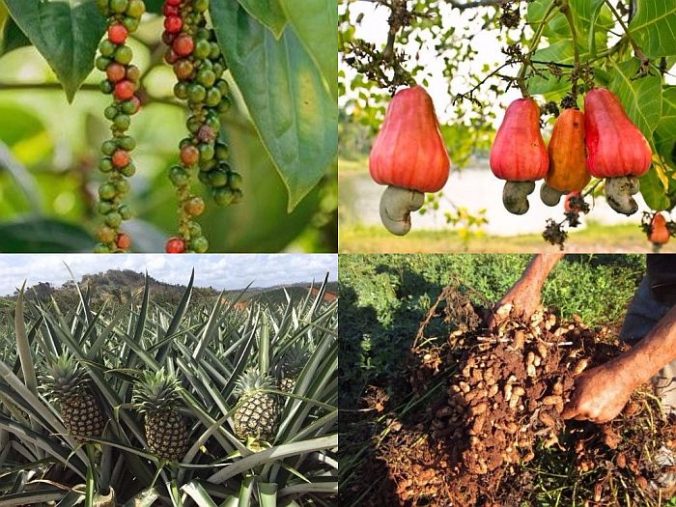 When browsing through your local supermarket, have you ever wondered what some of the produce and crops look like before it is harvested? While some foods look exactly like you see them when you buy them, others look very different when they are harvested. Below, we at AgHires have showcased some of our favorites.

Peanuts are members of the legume family, which also includes beans and peas. The plants have an interesting way of developing and growing. Once the flower is fertilized, they create a peg that extends in a downward motion. This grows down into the soil. This is where the peanuts form. To harvest peanuts, the soil around the plant is loosened before the plants are pulled up. Excess soil is shaken loose while the pods remain attached. Once taken from the ground, peanuts need three to four weeks to dry.

Cashews are grown in the tropics, and cashew trees flower and fruit in the winter or dry season. Cashew nuts grow out of the bottom of what appears to be a swollen fruit called the cashew apple. This is actually the swollen end of the stem right above the cashew nut. Cashews can be harvested about two months after the fruit has set. The apple will turn a pink or red color and the nut will become gray. When the fruit falls to the ground, it is ripe.

Pineapple is a seedless fruit known as a syncarp, which means that the fruit is produced from the fusion of several flowers. The plants grow to be between 2 ½ and 5 feet tall. The plant is considered mature once it produces flowers, and fruit can be expected in about six months. Mature pineapples weigh between five and ten pounds and when they are one-third or more yellow, they are usually ready to be harvested. This is done by cutting them off of the plant where the pineapple and the stalk meet.

When it comes to harvesting bananas, size is not a good indicator for picking time since there is such a wide variety of bananas. Banana stalks take around 75-80 days from flower production to mature fruit. Usually, bananas can be harvested when the fruit starts changing from dark green to a light green/yellow color.

Black pepper is the most commonly used spice in the world. The seeds are soaked overnight to soften the seed coats before they are planted. Black pepper is a flowering vine that is cultivated for its fruit. The fruit is then dried and used as a spice and seasoning. Once it is dried, it is known as a peppercorn.

Dragon fruit is a cactus plant fruit that is prized in Southeast Asia. The fruit takes a period of about three to four months to grow and ripen. It grows on top of the branches and over the growth period, the fruit matures to a large, orange/pink, plump shape. On the inside, the texture is much like a kiwi.

Almond fruits are drupes, which is similar to cherries. The drupes grow from the almond tree’s fertilized flowers and mature in autumn. The drupe is surrounded by a leathery hull, making it look like a green peach. When the outer husk is dry and splits, it is time to pick the almond nuts. Once 95 percent of the drupes on the tree split, it is time to start harvesting.

Artichoke harvest starts in late July or early August and continues for quite a while. Most of the nation’s artichokes are grown in California due to its mild winters. Buds are usually harvested once they reach full size and just before the bracts begin to open. When being harvested, the bud plus three inches of the stem must be cut off the plant.

Vanilla beans are ready for harvest six to nine months after pollination. They are harvest one at a time as they begin to ripe and reach full maturity. Their color will change from dark green to light green with a yellow tinge. If a bean is picked too early, they produce an inferior product. If a bean is picked too late, the beans start to split. The beans are easily removed from the plant if they are well-ripened.

These are just a few examples of how interesting some produce looks before harvest. If you are interested in reading more about how to grow and harvest on your own, click here.

Could you recognize your favorite foods before harvesting?